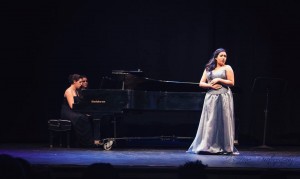 Annette Nelson and Shana Lambert are pleased to announce that they will be sharing in a joint recital at St. Luke’s Episcopal Church on November 21st. Annette and Shana presented their first recital in May 2014 at Penn a State Altoona for Shana’s senior voice recital. Since then, the duo has gone on to continue developing their craft separately and are thrilled to present their artistry as a duo once more in the city where their recital work began. 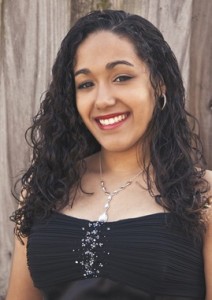 Soprano, Shana Soriano Lambert was most recently seen performing a solo recital at the new Premiere Piano Home of Steinway. She spent the summer performing in the beautiful city of Graz, Austria as part of the AIMS in Graz Opera Studio program. She also recently performed a solo recital entitled Traveling Through Music at the Wolf Kuhn Theater, and Duruflé’s Requiem under the baton of Dr. Bruce Chamberlain at Avery Fisher Hall at Lincoln Center in New York City. In April 2014 she won first place in the Honors Program’s Undergraduate Research and Creative Activities Fair, Performance Division, for her research of the performance practice of German Lied and her performance of “Die Nacht” by Richard Strauss, alongside her friend and colleague, pianist Annette Nelson. Mrs. Lambert had the amazing opportunity to perform at the St. Stephens Cathedral in Vienna, Austria, as a member of the choir for the The Birth of Christ, by Andrew T. Miller in December 2013. She is a graduate of The Pennsylvania State University where she studied with Dr. Bonnie Cutsforth-Huber, and is currently working towards her Master of Music degree at George Mason University where she studies with Dr. Kathryn Hearden. 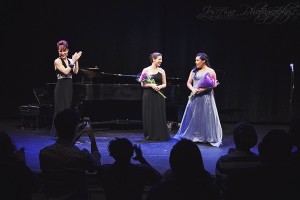 Annette and Shana began their work together while they were both sopranos in Dr. Cutsforth-Huber’s choir Ivyside Pride at Penn State Altoona. While members of the choir, they were privileged to have sang together as choir members at Carnegie Hall, Lincoln Center and St. Stephen’s Cathedral in Vienna, Austria. In autumn of 2013, Annette and Shana began collaborative work on Shana’s senior recital under the instruction of Dr. Cutsforth-Huber, with Annette accompanying Shana on piano. It was immediately evident that they were an impeccably matched team.

Since their first recital in May 2014, Annette has since accompanied Ivyside Pride, trained under Dr. Cutsforth-Huber as a Lyric Mezzo-soprano, and continued intense piano study under the world renowned concert pianist Dr. Steven Smith. She graduated from Penn State in May 2015 and not long after was able to study at Summer School for the Solo Voice in Saskatchewan, Canada, where she was able to receive instruction from Lawrence Ewashko, Naomi Suchan, Lisa Hornung and Mark Turner.

Annette and Shana are excited to share a new form of their collaborative bond by expanding their repertoire to include vocal duets. Shana being a perfect cast for Susanna and Annette, the spitting image of the trouser role of Cherubino, from Mozart’s Le Nozze di Figaro, the two are excited to bring these characters to life and bring characters from the stage of opera to the sanctuary of St. Luke’s. More works to be performed include pieces from artistic voice works by Edward Elgar, Richard Strauss and Benjamin Britten, sacred works, classic arias from Faust and even a tender duet from Wicked, there is something for everyone at this recital. Annette and Shana are honored to have composer and pianist Dr. Timothy Melbinger of Penn State Altoona accompany them on their duet works and Annette’s vocal pieces.

All are invited to come and join in this evening of music, free of charge, on Saturday, November 21st at 7 pm at St. Luke’s, 608 13th Street in Altoona, PA in the sanctuary. Bring a friend and share news of the event with friends and family!