Home / Uncategorized / From home back to… Home

From home back to… Home

If you’re like anyone else in the rest of the world right now, you’ve probably been sentenced to a life that will have to be lived at home. For some of us, this is a bit of a chore. For the other part of us, this isn’t so bad. Some of you may be the extroverted types (like me) that have to fight the temptation to chat it up with your mailman or talk the ear off of the grocery store cashier while you’re out getting your essentials. If you’re an introvert, you might not find this to be too bad, but you’re taxed with a bit of anxiety about a world free of extroverts out there making the world a safer place for you.

It’s not easy for either sides of the social orientation aisle at this time. Truth be told, I can understand dreading being at home for so long, especially if there are things in your heart and mind that haven’t been sorted out. How comfortable you are at home reveals a lot about the state of your heart and mind. There was a time I didn’t like having to be at home, and it sometimes felt like a prison sentence.

It was a bit unusual for me to be at home for most of my childhood life. I still get questions about my schooling at that time and what affect it had on me later. At the time, I was very used to it, and also at times, I loved being able to lose a couple hours of my week playing video games and being closed off to the world. But by the time I hit 18 and 19, I wanted to get out there and make my mark in the world and certainly self actualize, and see what all those years at home had made of me. 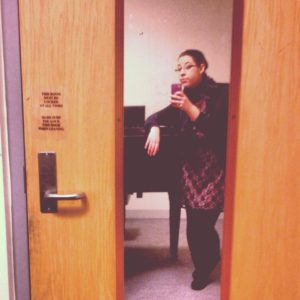 Life in social isolation as a pianist, 2013

Surprise: the profession I chose to make myself something with was being a pianist. Most serious pianists have to spend a considerable amount of their time alone. In a practice room. Away from other people. Sometimes I absolutely enjoyed being cloistered away from others in a windowless white room with nothing but the piano and I. Other times, it was torturous and I wanted to be back out in the world and see what was going on without me.

After college and a rough patch in my mid 20’s, I was especially tired of being at home, facing memories, some nicely stowed away mountains of clutter and unfair judgments against myself for a life that was reasonably lived. I worked 5 jobs, found as much time as I could to socialize when I wasn’t working, and essentially only went home to sleep. I did this for about an 8 month time span.

Then, I needed a new job. It ended up being a work from home job. So, now, most of my time was, again – spent in isolation and working away from other people. This is something that happens to me over and over again in my life, and this past year, I was able to get some insight as to what this is as a concept.

Apparently, it’s the concept of circumambulation from Carl Jung. I was struck by this idea from lectures by Dr. Jordan Peterson, and it occurred to me just shortly before the United States was introduced to the “invisible enemy” of COVID-19, that I have a recurring theme of learning to be comfortable with myself in isolation. Going back home, when I don’t have a choice in the matter, is my circumambulation of the self. I’m always forced to go back to what I consider to be home; which is always away from others.

“I began to understand that the goal of psychic development is the self.

There is no linear evolution; there is only a circumambulation of the self. Uniform development exists, at most, at the beginning; later, everything points toward the centre.

This insight gave me stability, and gradually my inner peace returned.”¹

I mean, I spent the first 18 years of my life mostly in my home. It wasn’t bad. It just was. It made me feel different being homeschooled. I was sick of being called the “different kid.” So, I was on a mission to prove my difference didn’t mean deficient. I accomplished that, and I liked being out in the world, so I wanted to stay out in the world.

Then the world decided hey! You’re going back into your house, mostly, in order to eventually get back out into the world. But then the world decided to put me back into my house so I can process these formative years of my life and prepare for whatever is to come. I’m like the rest of you. I’m not thrilled about having to be home. But for me, I knew it was coming, I knew this was a theme of my life that I’m familiar with, and I know there’s some big adventures and exciting turns in life waiting for me after COVID-19 is done with us.

The thing you might be avoiding when you hate being home, is yourself. That’s the only thing that’s been different for me in this return home. I’m pleased with the choices I’ve made and bettering myself in the last 3 years. I’ve earnestly tried the best I can, now I have an opportunity to stay home, think, and sharpen myself up to figure out how I’ll be a better version of myself once the world opens up again. I wouldn’t be so thrilled if I had been avoiding myself and things I could have been doing better over the past 3 years.

There’s a big adventure and challenge waiting for us all after this is over. We should stop avoiding ourselves and those close to us to figure out how we’re going to rise to the occasion. Home isn’t a prison. It’s a safe place to regroup and start over.

¹“C.G. Jung: ‘There Is No Linear Evolution; There Is Only a Circumambulation of the Self…”.” Jung Currents, December 8, 2013. http://jungcurrents.com/jung-chartres-mandala.