Mad Men and Feminism: Are we “ahead?”

I’ve had a love-hate relationship with Mad Men. I’ve grown to love the show, but I have hated it in the past thinking that it glorified extra-marital affairs. I was concerned that showing adultery in the show was glorifying this type of behavior, but I removed any personal sentiments I had about the situations portrayed in the show and realized that sadly this behavior was prevalent in the ’60s and it’s still prevalent now.

My current rant isn’t going to be about adultery, though. It’s going to be about women. I thought seeing this show would make me appreciate how far we’ve come with women’s rights and I should appreciate the world I live in, but I look at this show, and if it’s historically accurate… I think that women who are successful now could have been successful then. I think we share the same struggles of the career women featured in the show. 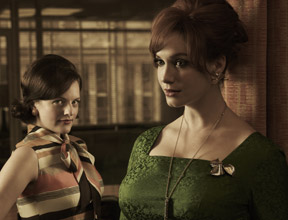 At first when I watched the show,  I quickly identified with Peggy Olson. She’s still a favorite of mine, but I find that she has too strong of a belief in authority and that if she does everything right, she’s going to be rewarded for it. Many women still feel this way currently. If we do what society asks of us, we’ll get our due reward. Buy all the women’s fitness magazines, read Cosmo or whatever, follow the BuzzFeed tips on how to bag a man, do all the 1, 2, 3 to-do lists and you’ll get what you want and be happy. Peggy also believed this, and at this point, she’s finding that following all the rules that society dictates don’t get you what you want. (Or, what you think you want.) Many women still believe this is the way to get ahead: do what you’re told, do what society says will help you get ahead and you’ll get there and be happy.

As I’ve grown older and progressed through my college years, I find that I more readily identify with Joan Holloway (much to my own surprise). She finds rules that society sets are flexible, and she’s ready to change with the times, change her strategy and correct mistakes when she finds herself in dangerous situations. Now, I want to be careful when I say I identify with Joan, because I wouldn’t be as promiscuous as she is, of course. But I admire her character’s chutzpah. (As a side note, I’m very happy my browser didn’t correct me typing “chutzpah” just now.) I admire Joan because she takes what is benifical about society’s rules for women and uses them to get ahead in her own way. She seems to accept that progress isn’t dependent on her and she’ll take advantage of what she can to get ahead. I wonder if this is what women have to understand about the present time, that progress isn’t being made and we have to use cunning means to get “ahead?” Whatever “ahead” is…

Both characters struggle with juggling the demands of career and motherhood. Motherhood and womanhood seem inseparable – women are still struggling with how to reconcile these identities when they also desire to have a career. I know this feeling and many other girls my age face the same questions as Joan and Peggy: “Why are you going to college if you also want a family? Don’t you know you can’t have both? One of them is going to suffer, and it’s probably going to be your children.”

While I watch Mad Men when I force myself to relax, I still hear this question that various new people along the way ask me. “How are you going to be a pianist, a singer, a scholar and a wife? Then, a mother? How are you going to do all that?” As I’ve talked to other women, I’ve been confused and strangely comforted to know they hear the same questions on a regular basis also.

I don’t think we’ve made progress in women’s rights in the past 50 years. I know because I identify with Joan and Peggy’s struggle. I shouldn’t feel what they’re feeling when they’re in the workplace (especially highly gender specific workplaces). Yet, I feel it and I get the same questions they did while they were in their 20s and 30s. I wonder if we’ve made progress? Has feminism peaked? Is it still held back? Are we going to be honest about what is holding feminism back, if it isn’t making progress?